Where can I run my tethered car?

The Retro Racing Club
and the
Great Carlton Raceway 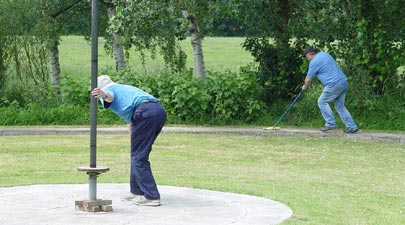 One of the greatest frustrations for tethered car enthusiasts has been the lack of opportunity to run their cars in Britain. If you were a member of the BTCA and raced either a modern FEMA car or a more recent vintage model, then there were the European tracks, but for the collector, home builder and fun runner there was little opportunity, unless you were prepared to risk the compass circle at Old Warden, and its propensity for wrecking cars. It was something of a red-letter day then, when it was announced that the inaugural meeting of Peter Hill’s Great Carlton Raceway would be on 12th June 2011.

The Retro Racing Club holds a unique position, having been set up by Peter Hill in 1996 to ‘Encourage the building and running of tethered racing cars of the more traditional type.’ This was later extended to include vintage tethered hydroplanes as well. Peter started by publishing a regular newsletter that ran to seventy issues over twenty two years and then expanded the club’s activities by offering numerous drawings, castings, and a variety of tyres to assist those interested in building or restoring cars.

Conscious of the need for a facility to run cars, Peter built a track at his home, which became the regular venue for Retro Club members for fun competitions and thoroughly enjoyable ‘days out’. Apart from the couple of portable poles that were set up on car parks in the South West, the track at Souldrop was the only permanent facility available in this country. This was used extensively until the end of the 90s, when a move to Lincolnshire brought an end to the ‘Souldrop Speedway’ and the opportunity to run cars.

There were promises and hopes surrounding possible sites for new tracks which all come to nought and the BMCC portable track did offer some facility until that group imploded so spectacularly. The only prospect on the horizon was that Peter did intend to build a new track when time and money allowed. Eventually construction did start, but an unfortunate series of health problems and family tragedies meant that the track was not finished until 2010.

The track at Great Carlton is 7 laps to the ¼ mile and with the pouring of a wide apron during the 2013 season offers the ideal and unique opportunity to have a run with anything vintage or vintage style, as long as a certain degree of common sense is involved, speed wise. Since the Retro Club has been in operation, members have build dozens of cars of amazing variety, as well as rescuing and restoring original models, and here is a chance to try them out.

The track can clearly be seen on Google earth, but more recently, the photos below were taken from a drone.

If you have an interest in tethered cars, especially being able to run them, then it is certainly worth joining the Retro Racing Club. For further details of the Club and the long list of available plans, both for cars and tethered hydroplanes, contact Peter Hill by the power of electronic communication at  arty.pole@gmail.com