The latest 3,5cc car built by David Giles for the 2006 competition season

The car has been designed to provide the minimum cross–sectional and projected area whilst covering all the relevant components, hence the ‘camel with broken back’ appearance! 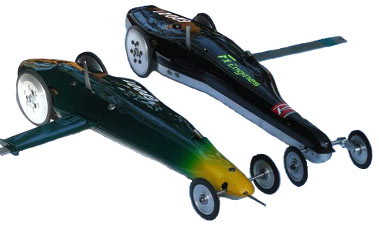 For the UK based tether car enthusiast wishing to enter competitions the closest tracks are in mainland Europe. This unfortunately limits opportunities to test and develop one’s cars, so things do tend to progress rather slowly. Sometimes, with persistence and careful pre-race preparation a good result is achieved. This was the case at the "Modellautorennen Hannover" on 06 June 2010.

In 2006 I began the design and construction of "DJR 3" which is the third car in my development series. It was completed in May of that year. It first took to the track at the European Championships in Poland. The car, although reliable, has never reached its true potential in spite of a fair amount of development work on the engine and pipe.

For the 2010 racing season modifications made to the car have been to check and adjust the longitudinal balance by adding 55g to the nose in the form of car wheel weights and to increase the rear (drive) tyre diameter by a nominal 1.5mm. Tyre diameter is a variable in the gearing of the car and is an educated guess based on condition of track surface, relative humidity, exhaust timing and one’s own reading of weather conditions on the day.

We try and attend 3 race meetings a year and make them into mini breaks, thus our trip to Hanover began on Wednesday 02 June with a drive to Kent to see relatives and a night stop close to the Channel Tunnel terminal. The following day we drove to a favourite hotel in the village of Ahlen - Vorhelm for a very comfortable overnight stop. On Friday 04 June we made the comparatively short (100 miles) drive to the track which is to the east of Hannover, quite close to the airport. Total distance from home: 614 miles! The track is set in a large area of meadow and is surrounded by mature silver birch trees planted when the track was built just over 50 years ago. After checking into our nearby hotel, and greeting lots of friends, we prepared to test run the cars.                 The   re-balancing of the car "DJR 3" made a considerable difference to its performance, so I had high hopes for the competition. My second car, fourth in the series and named "Papagai", is still a little temperamental but potentially should be the faster. It ran very well but needs more work on the piston/cylinder fit and tank setup.

Competitions are normally run over two days and depending on number of entries three runs are possible in each class. On the first run with "DJR 3" it was clear that the car was running very well.

This was a very pleasing personal success, as I have finally broken the 240kph barrier. It has taken a lot of time and effort. The record for the class is currently held by Mart Sepp of Estonia at 258.129kph, so I still have some way to go, but my next goal is to break 250kph, the current benchmark speed for the class.

Thanks to David for producing this material for OTW.