What makes it ‘Flash Steam’ ? 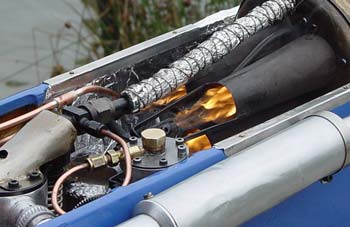 OTW makes no apology over its enthusiasm for flash steam hydroplanes and those that have devoted untold amounts of time and effort to ‘further the cause’; hence the continuing publication of FS related articles. The question remains for many though, what exactly is flash steam? We have attempted to provide a simple answer to this question by quoting from a set of notes that noted flash steam exponent, the late A.W Martin had prepared for a lecture on this subject to a Model engineering society sometime in the 1980s. Thanks to his son Tony for allowing us to use these notes, which include Bert Martin’s usual forthright and pithy commentary on the world that he saw about him.

"I was asked to give a talk on flash steam, a subject with which I was once acutely involved. But I made my first flash steam plant almost exactly 50 years ago, so that I have to wind the clock hands back quite a number of times. To first say that I am pleased to see that model engineering still survives in a society that is so vastly different from that of 50 years ago. Now, I look at things in a different way to most people: I look at ‘the arts’ –as they are so-called – where people make music, or act, paint pictures, as they call them, often with thrown on paint, and even make piles of old rubber tyres, or childish arrangements of house bricks."

"For some reason, one that is quite beyond my power of reasoning, all governments regard this as being part of our culture – and essential part of our society: and so foster and subsidise such inanity with hundreds of millions of pounds. But I can look at those other things, the ones that re styled artefacts and so separated by a divider that says they are not art, but craft. To me, every bit of Britain’s heritage owes more to craft than it ever did to art. I can look at models of any sort, and quite literally live with the painstaking care that brought them into being."

"I once gave a talk at a certain club meeting: and some years later, I was discussing club matters with its Chairman, the same person who had asked me to do the talk. He said – I don’t look around for people to give talks now: we had three – and only one of those knew what he was talking about. I then said, oh who was that? and he told me. The name was not mine, so you have been warned: don’t expect too much from me, for I have already been found wanting. But even so I’ll do my best."

"And then to ask the first question- just what is flash steam? – and to answer that all steam is simply water in the gaseous state, and that the term ‘flash’ simply denotes a method of quickly converting water into steam and nothing more. And to next ask; how quick is quick?" (Here Bert provides some complex mathematics equating water velocity, cross sectional areas and water/steam volumes to calculate the rate that the boiler needs to evaporate the water) Answering that in the case of one of his smaller flash plants, the engine ‘ate steam’ at 167 ‘bites’ a second (10,000rpm), which equated to vaporising enough water for 8 feet of boiler tube full of steam every ¼ second. His conclusion, "So that if a ¼ second is a flash, then that is flash steam."

"As a small aside, and to show how ‘hot and dry’ steam can be. A younger brother of mine once wrote in a school essay that one could burn oneself with steam: only to have the word burn crossed out and scald supplanted by his teacher. He was only about nine at the time, but he had watched my experiments, and knew that he was right, and that the teacher was not."

Here we leave Bert Martin who has provided the basic theory of flash steam, converting water into steam exceedingly quickly and via the vagaries of the laws of Boyle and Charles (remember them from school) raising the steam to exceptionally high pressures and temperatures. It is here that flash steam moves into an entirely different league compared with a conventional model steam plant. While these work somewhere between 80 and 150 psi and around 125-175 degrees C, a flash boiler can generate steam in excess of 4,000 psi. and up to 650-680 degrees C. (exact figures can be extracted from steam tables)

So what are the limiting factors? First and foremost, maintaining the structural integrity of the boiler coil and steam supply pipe when it is red hot and at extreme pressures. Secondly keeping the motor together and running under the same conditions. In a way, everything else works towards these two ends.

The development of flash steam hydroplanes is the story of how each of the elements has had to move in step, and here articles by those closest involved provide a fascinating insight into how they have set about achieving this. The major changes in the design of flash steam plants have been relatively few and are worth considering.

Almost every configuration of motor has been used, with one, two, three or four cylinders and varying styles of turbine. Valve gear has ranged from the simplest slide valve, which is very effective at low pressures, through rotary, piston and poppet valves, all in varying forms and each still with its uses. In a simple steam engine, a valve allows steam into the cylinder, which pushes the piston down, filling the cylinder behind with steam. This is the least efficient way of using steam and so the next stage was to close the inlet port after a short period so that the steam could expand. As the pressure and temperature goes up, so the time the port is open becomes less and less allowing more expansion to take place. Having got the cylinder full of steam, it then has to be emptied, which again in a simple engine is via a valve which open to allow the piston to push the steam out. The first real development was to drill a series of holes in the cylinder wall to allow the steam out at the bottom of the stroke, so steam in at the top, out at the bottom, hence ‘uniflow’. Some engines use a combination of these two systems and are best described as ‘semi-uniflow’. It is remarkable to think that Bob Kirtley's 120mph 'Pisces II' uses a poppet valve uniflow motor as did Fred Westmoreland 90 years ago.

The attraction of flash steam can easily be appreciated. A supply of steam with huge energy values, almost instant starting, light weight with no pressure vessel, and relative safety, as there is no danger of a boiler explosion. The small quantity of water involved at anyone time is soon exhausted and the motor will stop as soon as the steam escapes.

The last question is whether it is a viable source of power in models? H.H Groves certainly showed that a model aeroplane would fly quite satisfactorily with such a plant and there are those still continuing to experiment with steam-powered planes. There have been flash steam tethered cars, but these tended to be more of a novelty than a serious venture. Boats still seem to be the natural home of flash steam, where in straight runners it makes a thoroughly efficient package and has been refined to a very high degree, especially by members of the Blackheath Club. In hydroplanes it is a little more difficult. While IC engines are categorised by capacity, FS boat are classified by weight. The ‘A’ Class is the largest at 16lbs max. ‘B’ Class at 9lbs (up from 8lbs in the late 90s), and the lightest ‘C’ Class at 5lbs all up. Historically flash steam held the outright speed record from 1908 until 1936. From then on FS boat would compete on equal terms with IC engines winning many regattas in the process. In the 80s and 90s the ‘A’ Class steamers of Bob Kirtley and Ian Berne were more than capable of holding their own, taking the class record on more than one occasion. Frank Jutton, Olly Monk and Stan Poyser have shown that it is quite feasible to build a ‘B’ Class Steamer that would compete with the 15cc IC boats, but that is somewhat more of a work of art and ingenuity. The ‘C’ Class presents an even more difficult challenge that no one has taken up since Rob Bamford in the mid 1990s!

This then is flash steam!

Thanks to Tony Martin for allowing us to use his father's lecture notes and to John Groves, Ken Lawton, Tony Pilliner and Rob Bamford for additional photographs.