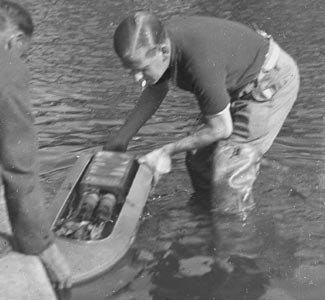 Tethered hydroplane designs tend to reflect that they are functional craft and usually built for one purpose, and that is to go as fast as possible. Just occasionally someone will revert to the Victorian ideals of making something that is not only functional, but looks good as well. One thinks of John French’s ‘Little Star’ from the mid 1930s or George Stone’s ‘Lady Cynthia’. For pure elegance though, ‘Polyester’ has to be the most aesthetically pleasing hull ever put on the water. Not only did it look lovely with its smooth flowing lines, but it was extremely effective as well, with many records and successes to its name. Its name also gives a clue to the fact that the hull broke with tradition having been moulded from GRP. What is even more remarkable is that the designer and builder of this groundbreaking boat, Stan Clifford, had actually been born in the Victorian era and was in his fourth decade of racing when he built it.

Stanley Henry Clifford was born in Stroud Green, North London, on 26th August 1895. His father was a shopkeeper and a keen model engineer, with a treadle lathe, bench and vice in the kitchen larder at Ossian Road, where they lived. Around 1907 Stan became fascinated by the work his father was doing making pieces for a model steam locomotive. Illicitly at first, and then later with his father’s blessing, Stan started to acquire the skills that would become so evident over the years. His first boat was a direct result of his father taking him to an ME Exhibition where he saw an electrically driven model torpedo boat on the Basset Lowke stand. Mr Clifford senior was less than enthusiastic about stumping up £5 to buy it for his son, so Stan decided to build one for himself, so starting a career in model boating that was to last through to the 1960s.

Like many other hulls of that period, his first boat was built from flattened out tin cans, and he soon discovered that this was not the easiest material to work in, but he persevered. The result was not all he had hoped as the weight of the motor and accumulator had the water lapping at the gunwales, and it didn’t seem to resemble the boat he had seen at the exhibition. The next venture was a steam engine built from parts liberated from father’s scrap box, which performed exceedingly well on a pot boiler made from a tin can.

Being mechanically minded, Stan was attending a technical school, which enabled him to make patterns, cast a crankcase and machine up a crank for his first IC engine. By now he was about 15 and had found a cylinder, piston, conrod and valve gear from a four-cylinder FN motorcycle engine on a junk stall near the school that formed the basis of his new engine. Ignition via a Ford trembler coil was fine, but in spite of numerous attempts he could not make a carburetter that worked, so he connected the inlet valve to the gas stove with a length of pipe. The engine was soon running happily, and filled the kitchen with thick smoke, which did not endear him to his mother. She promptly banished him to the shed for any further experiments.

This led to Stan starting to build a ½ inch scale locomotive, but lack of funds prevented it being finished. For a while Stan contented himself with rebuilding motorcycles and sidecars before selling them at a profit. By then, he had left school and was working, giving him enough spare cash to buy his first lathe, a 5 ½ inch swing Zyto. The First War was nearly at an end when Stan married Maud Emery, in Edmonton late in 1918. Following the end of the War, light cars and cycle cars started to become popular, both on the road and for racing which inspired Stan to sell the motor cycle and sidecar he was using and build a two seat cycle car from scratch. With its ash frame and 8hp V twin engine, it took him two years of solid work to complete. Two seats were now no longer sufficient though, as daughter Gwendoline was born in 1921.

Around 1923, he was intrigued by an item he had read about a speedboat regatta being held at Victoria Park in east London, so decided to drive over there in his cycle car. "When I arrived, several boats were dashing across the lake at speeds I never thought possible; and when the speed boat boys let their boats run around the pole at speeds of 25 miles per hour the old urge to own a boat returned." 1923 ended with another addition to the family, Marjorie.

He decided to build a hull that very much followed the current style, essentially a single step, 1 metre long rectangular box shape. Power plant was a single acting, slide valve 90-degree V twin with a flash boiler and blowlamp. Although the blowlamp and boiler worked fine, the engine soon ‘cracked up’ under the superheated steam and was replaced with a 7/8th bore and stroke, single acting vertical twin with geared oil and water pumps. This configuration seemed to work well, with the boat recording 22 mph on its first two laps around the pole, but the lamp and boiler could not keep up with the engine. With the boat looking like a box and the drumming from the tinplate hull, it was named ‘Chatterbox I’.

A new steam generator was required, and here Clifford adopted the twin coil and twin blowlamp design that became the standard for many years to come. The wider steam generator dictated a broader hull, this time a more traditional boat shaped design with a hollow V section at the bow leading to a shallow step. This was to be ‘Chatterbox II’ that almost broke George Noble’s absolute record on its first time out. The initial run of 32 mph proved the potential of the layout, and in Stan’s own words "I had realized that having got the engine and pumps to stand up satisfactorily, it was only a matter of brute force from the boiler to put another 10 to 20 miles on the speed." In 1924, Stan Clifford and ‘Chatterbox II’ showed he had achieved just this, by setting a new tethered hydroplane record at 36.3 mph.

Stan relates the following experience with ‘Chatterbox III’, which is not unique, as many of us have ‘been there’, but perhaps his is the most spectacular. " My wife was out and I had made some alterations to the water pump stroke and wanted to check the results before going to the pond next day. So, filling up the bath with about two feet of water, the boat was placed in and the blowlamps lit. After allowing about half a minute for the coils to heat up, I started the engine and as the propellor was facing the sloping end of the bath, there was a terrific rush of water that reached the ceiling and fell back on the floor, drenching everything, including me, who could not get out of the way because I was holding the boat. Boy, oh boy, what a mess. I was in the dog house for weeks after that."

‘Crackers’ was becoming more reliable, and started to feature in regatta results, but to avoid confusion with a boat from Farnborough that shared the same name, ‘Crackers’ became ‘Rumpus’ for the rest of its life. By this time the boat was achieving 39.5 mph, encouraging, but well short of the speeds being obtained by other competitors. ‘Crackers’ was to meet an ignominious end, following a visit from ‘Jerry’ that flattened Stan’s workshop in Islington. "When it was eventually found in the wreckage, it had to written off as a total loss."

Following the end of the war, a new workshop was built and Stan commenced work on a new engine. He discussed the options extensively with various members of the Victoria Club, including Ernie Clark and Edgar Westbury. Firstly, the engine was all aluminium to reduce weight. Tubular pushrods operated overhead inclined valves with hairpin springs. Dry sump lubrication, magneto ignition and a diaphragm fuel pump completed this sophisticated motor. With the new season looming, there was no time to build a new hull, so Ernie Clark kindly donated one of his old boats (probably Tiny 7) to get Stan underway. The oddest feature of the installation was the position of the magneto, which was in the stern of the boat, driven off the prop shaft through a 2:1 gearbox and cardan shaft.