Triggered by the excellent On the Wire website and its account of goings on at Eaton Bray in the late 1940s and early 1950s, I had a rummage around my archive and, aided with a number of photographs and the pages of contemporary copies of 'Aero Modeller', (two words in those days) have jotted down a few memories of those far-off days.

In 1946 my late father E. J. ‘Eddie’ Riding left the Aeronautical Inspection Directorate (AID) following a 20-month stint signing out de Havilland Mosquitoes at Leavesden. On 1 March 1946 he took up an appointment with the Harborough Publishing Company Ltd at Eaton Bray as Chief Draughtsman and a member of the editorial staff. His main responsibility was working as co-Editor with Owen Thetford on Volume VIII of 'Aircraft of the Fighting Powers' for which he produced all the three-view general arrangement drawings.

My dad subsequently became a very close friend of D. A. Russell’s. When DAR was struck down with chicken pox and was forced to take a holiday, he and my dad, together with DAR’s sons Michael and Timothy, flew to Jersey in a Morton Air Services Dragon Rapide, returning to Croydon in a 40mph gale in another Rapide two week’s later.

At about this time DAR married Joan Nayler and she became my first love! A pretty and very intelligent woman who flew aeroplanes – what more could a young boy want? I believed she named her son Edwin after my father. I spent many happy weekends at the Russell’s splendid home at Shothanger Wood Cottage at Boxmoor. In the attic there was the most amazing array of 1/72nd scale model aircraft – and I was allowed to play with them. I so enjoyed my stays at Boxmoor that I was always reluctant to return home.

The accident was reported in the local paper under the heading 'Aircraft Crash Escape' and went on to say 'Two young women had a lucky escape when the Puss Moth plane in which they were travelling crashed and burned out at Eaton Bray Sportsdrome on Sunday afternoon.
The occupants, Miss Joan Nayler (30), of White Waltham airfield, Maidenhead, the pilot and Miss Mary Wood (24) of the same address were able to scramble from the burning plane.
"It was all over in a few minutes" said a member of the 'Observer' staff who saw the crash. "The Puss Moth was a frequent user of the Eaton Bray landing ground and it appeared to be making its usual landing. It was a gusty day and it seemed that the wind suddenly lifted one wing of the aeroplane and tipped it. The flames shot up through the cockpit when the aircraft crashed. The weight of the engine appeared to drag open the door, thereby helping the occupants in their escape. The petrol tanks exploded and the fire was practically out before firemen arrived from Leighton and Dunstable". 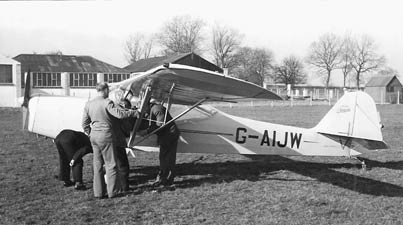 I think the greatest memories I have of Eaton Bray are the air displays that dad organised during 1949. As a teenager in the 1930s dad had attended many of Sir Alan Cobham’s National Aviation Day Displays and in 1938 worked as a licensed ground engineer with a travelling barnstorming outfit in the north of England. Thus the Eaton Bray displays had a touch of the barnstorming days about them and included some of these pre-war turns in its programme.

"When news of our Air Display got around, we were approached by a local sportsman who expressed the opinion that flying was ‘kid’s stuff’ and that he reckoned that he could put up as good a show as any of the highly skilled pilots here today. The organisers of the Sportsdrome have always been to the forefront in the furthering of individual talent, and we have accordingly placed a machine at his disposal. A member of the staff will explain the working of the controls to him, after which he will be left alone to his own devices".

At this event Hawker test pilot Neville Duke flew the Hawker Tomtit in a dogfight against a Tiger Moth flown ‘solo’ by Doc Morrell. The latter was ‘shot down’ and as the sole occupant was seen to bail out the 3,000 crowd went into a horrified hush as the 'pilotless’ Tiger dived towards the horizon and disappeared.

F. Marmol gave a superb demonstration of gliding, much of it inverted, in the Zlinn glider in which had recently made an endurance flight of 53 hours over nearby Dunstable! Later in the afternoon he was towed off to Elstree by the Tomtit to give another display. There were pleasure flights given by R. A. Harris in a Dragon Rapide and many take-offs were made from that small field with the biplane fully loaded with nine up. Earlier Harris had taken up the entire staff of the Sportsdrome in flights of eight at a time. I remember too the chequered control van with former Spitfire pilot ‘uncle’ Alec Lumsden giving an excellent commentary from its top. Altogether that sunny but windy Whit Monday was a day to remember.

There is an interesting postscript to all this. Many years later, when I was editing and producing 'Aeroplane Monthly', I met Neville Duke for the first time at a Moth event at Hamble. We got talking and during our conversation I asked if he remembered giving my dad a trip in the Tomtit at Eaton Bray. "I certainly do, but it was your father who flew me." He said that he had two photographs of the occasion and that he would send me copies. He did, straight away, with a letter saying how he had enjoyed the Eaton Bray meeting. A gesture that was so typical of that great man.

Many thanks to Richard for these wonderful reminiscences of aerial activities at Eaton Bray. All photos are from the archives of his late father Eddie Riding, as are the precise details of dates, aircraft, pilots, passengers and flights.

Photographs primarily from the collection of the late George A Cull, most of them taken at the Eaton Bray air displays of 6th June and 21st August 1949.  All photographs and text have again been very kindly prepared by Richard Riding. Two contemporary news reports refer to aircraft and events illustrated.

In perfect weather, the air show at Eaton Bray Model Sports-drome opened on Sunday, August 21, with a fly-past of light aircraft taking part in the various events. Included in the parade were a Rapide and an Argus, which carried on joy-riding for the whole of the afternoon.

Neville Browning was next off in his silver and green Tiger Moth for a display of crazy flying, after which he returned to accompany " Doc" Morrell in his Tiger for the next event. Messrs. Railing and Smith did a long- and a short-delayed parachute drop, respectively, from the two Tiger Moths at 1,800 ft.

Stanley Orton Bradshaw was inveigled into an Auster for his 'first solo', and proceeded to give a clever characterization of nearly every mistake likely to be made by earnest pupils. His final arrival was attended by the aerodrome fire tender and ambulance, and his prostrate and exhausted form was removed from the precincts of the field amid the laughter of the crowd.

Next on the programme was a furious dog-fight between two Hawker test pilots—Neville Duke in the Tomtit and E. S. Morrell in the Tiger Moth—at the end of which Morrell's passenger, Major Terence Willans baled-out over the aerodrome.

More aerobatics followed, this time by C. A. Nepean Bishop in a Magister of the Redhill Flying Club, before Mr. C. Ruffle in a Zlin 24 sailplane was towed-off by the Tomtit. The Zlin's acrobatic qualities were fully exploited.

An extra item on the programme was a demonstration of the Zaunkoenig, which is now being operated by the Elstree Group of the Ultra-Light Aircraft Association. John Fricker of the Aeroplane showed the slow-flying ability and general tractability of this amusing little aeroplane, and his performance was enlivened by a length of rope which caught in the tail-skid during take-off. During a low run however, the rope was deposited in the boundary hedge, and the demonstration continued without this extraneous parasite drag.

The final item in the varied programme was sharp-shooting by Colonel Crackshot with a 12-bore gun from the cockpit of the Magister. He proved to be a remarkable shot in addition to being psychic, for he burst the balloon targets on the ground in the order which the public requested.

Whit Monday's air display at Eaton Bray Model Sports-drome, Bedfordshire, was notable for the fun that was obtained from a few light aircraft operating from a comparatively small field. The display, in fact, was in the truest barnstorming tradition, and was greatly assisted by brilliant sunshine.

Low-flying aerobatics by Tiger Moths, a Hawker Tomtit and a Magister continued intermittently throughout the afternoon, and kept the ball rolling while other events were fitted into the programme. Despite the sunshine, there was an extremely keen wind during the afternoon, which rendered, the first parachuting event rather interesting and most difficult. Two parachutists of the Owen group flew over in port echelon in a Tiger Moth and a Magister, piloted by Neville Browning and A. E. Rumble, respectively, at about 1,800 ft. before jumping from the wings of the aircraft. One parachute was opened immediately, but the second was delayed for about six seconds before deployment. This latter parachutist succeeded in landing in a bed of nettles in a ditch on the edge of the aerodrome, about 150 yds. from the crowd, shortly before his companion drifted over the hedge.

After some aerobatics by the Tomtit, demonstrated by Neville Duke, this aeroplane joined the red and silver Tiger Moth, flown by " Doc " Morrell, in a dog-fight. During the course of the fight, the ‘sole’ occupant of the Tiger Moth was seen to bale out, and to drift on to the aerodrome. The parachutist turned out to be Major Willans, who, unfortunately, got late oscillation in the gusting wind and landed rather heavily.

F. Marmol, in the Zlin sailplane in which he recently soared for 53 hours at Dunstable, shook everybody with his prolonged inverted flight, slow rolls, loops, stall turns, together with one or two manoeuvres which were not in the book. He was later heard to say that he wanted a really aerobatic sailplane!

Somehow or other, a couple of extraordinary characters dressed in ragged clothes ‘gate-crashed’ the show in an ancient Austin 7, and proceeded to charge round the aerodrome before stopping to light afire and make tea in the middle of the runway. After repeated bombing with chalk-filled missiles, the whole contraption burst into flames and smoke, and was eventually extinguished by the aerodrome fire engine."